Skip to content
You are here
Home > Technology > YouTube is changing how subscriber counts are displayed, possibly shifting its culture

YouTube is introducing a major change to the way real-time subscriber counts are displayed, which could prevent analytics sites like Social Blade from actively displaying whether creators are gaining — or, more importantly, losing — subscribers.

Instead of seeing a YouTuber’s exact subscriber count (for example, 10,500,000), people will see a flat 10 million. This may not seem like a major change for people who aren’t invested in the messy lives of YouTube creators, but for a culture reliant on active subscriber counts as a way of proving who’s winning or losing when drama occurs, real-time subscriber counts are crucial.

A YouTube spokesperson confirmed to The Verge that sites that are dependent on YouTube’s API Services “will update at the same increments as the other surfaces.” That includes sites like Social Blade, which announced on Twitter that YouTube’s changes “might affect our data display.” Jason Urgo, CEO of Social Blade, told The Verge over email the company has “reached out to YouTube and are awaiting a response,” adding that “it appears like it will hit any third party which would include us as well.” 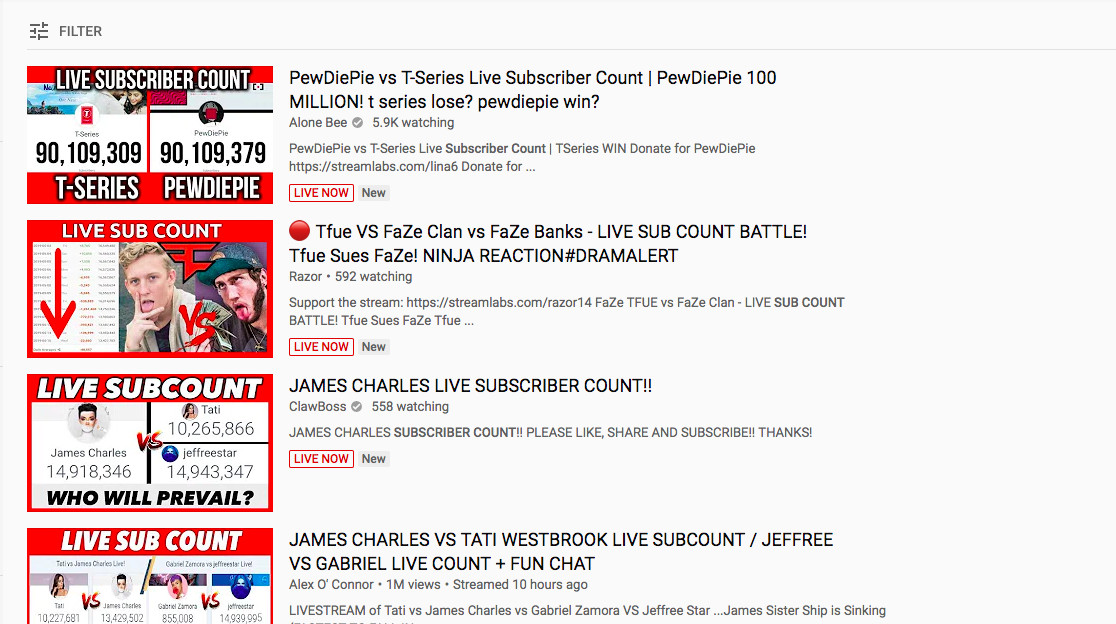 The announcement comes at a time when screenshots from Social Blade of real-time follower drops and gains are being spread to taunt some of YouTube’s most prolific creators, including Felix “PewDiePie” Kjellberg, James Charles, Tati Westbrook, Jeffree Star, and, most recently, Fortnite gamer Turner “Tfue” Tenney. Entire channels are devoted to live-streaming real-time stats from Social Blade, often using rifts between creators and trending drama as a way to pull in viewers. Soon, those channels will effectively stop working as intended.

The decision to hide subscriber counts comes at a time when the entire world is paying attention to creators’ follower counts. James Charles and Tati Westbrook’s feud, which led to worldwide coverage, focused primarily on how many subscribers the former lost and the latter gained. Charles and Westbrook even sat down at Google’s Spaces, according to one of Westbrook’s videos, to talk about the situation. Intense focus on real-time subscriber numbers from other creators within the community have led to forms of bullying online, including being used to mock creators who lose subscribers.

It’s unclear how much the creator community’s cultural use of subscriber counts played into YouTube’s decision to hide exact numbers and effectively disable third-party websites from using the platform’s API to run real-time counters. A YouTube spokesperson declined to comment.

Other platforms are thinking about testing similar product changes. Instagram is reportedly considering a feature that would disable showing how many likes a photo received in an effort “to reduce pressure on Instagram.” On Reddit, moderators have the option to hide comment scores and vote numbers in an effort to “try to reduce the initial bandwagon/snowball voting, where if a comment gets a few initial downvotes it often continues going negative, or vice versa.” Even Twitter is experimenting with playing down engagement features like retweets.