Uber has a new plan to lock customers into its transportation ecosystem while also expanding the list of services it offers ahead of an expected public offering in 2019. It’s called Ride Pass, and it’s Uber’s attempt at an Amazon Prime-style subscription service.

Ride Pass is available today in five cities: Los Angeles, Austin, Orlando, Denver, and Miami. For $14.99 a month — or $24.99 a month in LA (sorry, Angelenos) — riders can lock in flat rates on all the UberX and UberPool trips they take over the course of that month. The rates, based on historical data, will be heavily discounted, saving riders up to 15 percent on their overall monthly travel, Uber says. Ride Pass fares won’t be subject to typical external events like weather, traffic, or surge pricing. And there’s no limit to the number of rides customers can take each month.

Starting today, riders in those five cities can sign up through the app. Once they get rolling, Ride Pass subscribers can track their savings on every ride with real-time updates. It auto-renews, so there’s no need to remember to buy a pass every month. And users can cancel any time, but there won’t be a refund if they cancel in the middle of the month.

“We’re really keen to make sure this is priced to the point where people can buy the pass [and] not have to think too much about it,” said Dan Bilen, product manager at Uber. “The vision for Ride Pass is it makes Uber a budgeted line-item for riders.” 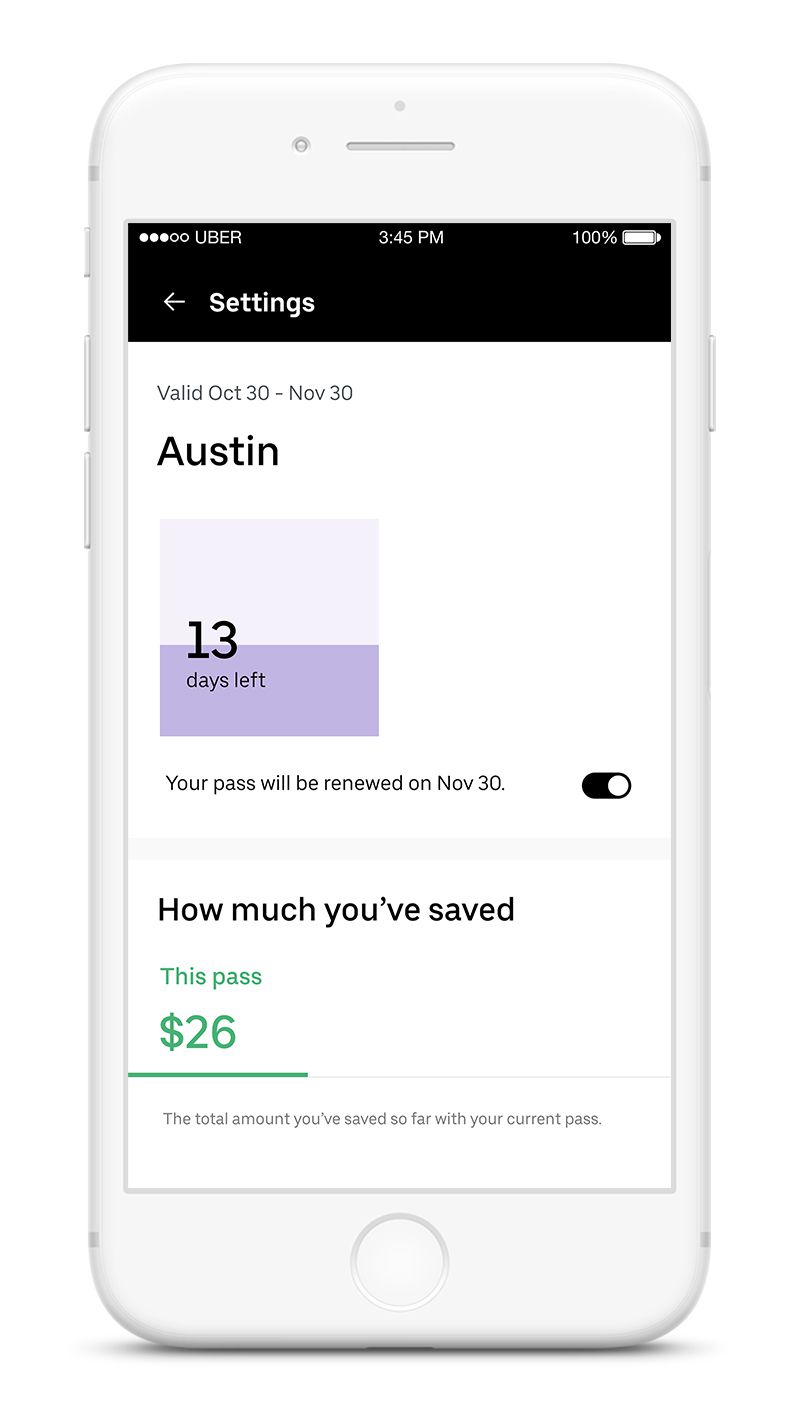 Drivers will still get the same earnings based on time and distance, with Uber covering the difference. That means, yet again, Uber is introducing a new product that will require it to pay out huge sums in order to cover the full cost. The company rarely turns a quarterly profit, and it’s reportedly looking to shore up its costs as it nears an IPO in 2019.

“There are various different mechanisms with respect to how we think about the economics of this,” Manik Gupta, head of product at Uber, told The Verge. “This is a unique structure that really meets the needs of our customers. That’s our focus right now… Over time, as we have more riders using our platform, all the rest will follow.”

Uber has been testing subscription plans on and off for at least two years. One iteration, “Uber Plus,” offered select riders in six cities 20 to 40 trips at reduced flat fare prices for $20. But starting a year ago, Uber began testing subscriptions in earnest, building up to a point where it was piloting the service with over a million riders taking tens of millions of trips in 25 cities across the country.

Uber isn’t the first ride-hailing service to experiment with subscriptions. Last month, Lyft rolled out its “All-Access Plan” nationwide, after several months of pilots. For $299 a month, All-Access subscribers get 30 rides costing up to $15 each. It’s not surprising that Uber would adopt a subscription plan so soon after Lyft — the two companies tend to match each other beat for beat — but it is surprising that Uber ended up with a subscription plan that looks so dissimilar to Lyft’s.

Bilen called the $299 price of Lyft’s subscription as “super high,” arguing that Uber was trying to avoid sticker shock with its service. “The price of $15 or $25, depending on the city, is way more approachable,” he added.

In its announcement, Lyft framed its subscription as a way to encourage people to ditch their personal vehicles and rely on ride-hailing for the bulk of their daily travel. Uber also has the stated goal of reducing personal car ownership, but it doesn’t harbor any illusions about how difficult that will be.

“People aren’t ready to make that commitment yet,” Bilen said. “We see this as a place to start. And if they get there in the future, great, but that’s a different strategy than we’re taking.”

But more than anything else, a subscription is a great way to get typically fickle ride-hailing customers who bounce from app to app looking for the cheapest fare or the shortest wait time. The announcement comes amid reports that Lyft’s business is growing at a faster rate than Uber’s, even though Uber remains significantly larger than its rival. And both companies are preparing to go public in 2019; Wall Street smiles on those companies with a deep bench of products and services.

Speaking of other products, Uber isn’t ready to include Jump bikes and electric scooters in its subscription plan yet, but LA-based subscribers will get free bike and scooter access. Maybe that will make the $24.99 price tag a little easier to swallow.